The History of Cobham Mill

We all drive past it, walk past it, admire it, and are glad that this reminder our heritage survives in Cobham in such a pretty location on the River Mole. Cobham Mill is one of the most important sites of our local heritage although few people know about its history. 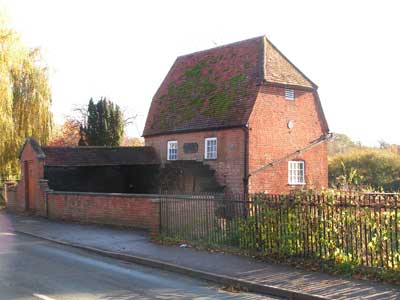 The Doomsday Book records that in 1086 there were three mills in Cobham. This is not surprising because in those days and for many centuries after, the milling of grain to feed both people and animals depended on the use of water or wind power. There were dozens of mills in Surrey, and Cobham was an ideal location because the River Mole has a fall of two metres in less than half a mile.

Not all of the mills in the area were used to produce flour or animal feed; some were engaged in the production of gunpowder or paper or used for leather dressing or wool cleaning. In 1881, a leather dressing mill on the River Wey was operated for the generation of electricity, enabling Godalming to be the first town in the country to get electric street lighting. At £195 a year the Town Council got a bargain!

The earliest known written reference to a mill at the site of the present Cobham Mill is dated 1534, when the Abbott of Chertsey owned it. Since then there have been several mills on the site and one, probably wooden, was washed away by floods in 1799. Two buildings were erected in its place, the larger of the two being a 4-stone mill used to produce flour and bran. The smaller mill, which is the mill we have now, was completed in about 1822, and towards the end of its life was used to produce animal feed.

A succession of families has either owned or leased the mill. The Abbott of Chertsey leased the mill to Richard Sutton in 1534. Those associated with the mill through the 17th, 18th and 19th centuries include Sir Anthony Browne, George Bygley and Thomas Lucy who remained at the Mill until 1787. From the 1830s the Sweetlove family was involved with the mill. In 1871 a Mrs Batchelor was the "Master Miller employing five men and one boy", and in 1890 her nephew, Thomas Sweetlove, took a lease on the mill. It was a delightful surprise when a great great grand niece of Thomas Sweetlove visited the mill last summer. 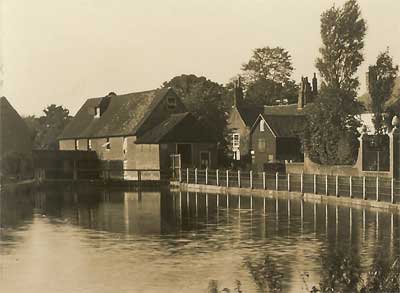 Eventually Cobham Mill was bought by Henry Moore & Son, the last owners to operate the mill commercially. In 1925 milling ceased due to the competition from roller mills situated at the ports through which grain from the USA and Canada was being imported.

The larger of the two mills was badly damaged during the Second World War when a Canadian tank ran into it. Then in 1953 this larger mill was demolished completely so that Mill Road could be widened. What was left - "our mill" was virtually derelict. It remained like this for over 35 years. Visitors to the mill can see photographs of the building in this state and the broken water wheel and pit wheel lying in the bed of the stream. It was a desolate sight and completely ruined the approach into Cobham along Mill Road.

Throughout the 1980s several attempts were made to have the mill restored. Everybody was keen to see this happen, but it was estimated that it would cost around £50,000 even for a partial restoration. The Cobham Conservation Group was particularly active during this time and set up a separate charitable trust, the Cobham Mill Preservation Trust.

Restoration soon got underway under the vigorous leadership of local resident, the late Ken Dick, who, with his wife Pam, was hugely influential in the project. In July 1990 the Trust at last became a tenant of the National Rivers Authority, by this time the owners of the mill. Sadly, both Ken and Pam died in 1997, but lived long enough to see the fruits of their efforts.

The restoration did not cost £50,000. This was because the work was carried out by a dedicated group of enthusiasts, including retired engineers. It was completed in the extraordinarily short time of two and a half years, and in May 1993 the restored Cobham Mill ground grain and produced flour for the first time in 64 years. 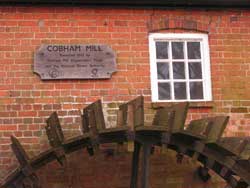 Since that very special day the Trust has taken responsibility for the year round care and maintenance of the mill, the milling machinery, and the surrounding areas. In addition, the Trust organises the opening of the mill to the public from 2.00 pm to 5.00 pm every second Sunday of the month from April to October. Private visits for schools, W.I.'s, and other groups can be arranged at other times. Entrance is free although donations are welcomed as these, together with the subscriptions from 'Cobham Millers', are the financial foundation on which the Trust is able to keep the mill running.

Anyone interested in the mill and in the Trust's objective of maintaining it for future generations to enjoy, can become a 'Cobham Miller'. To find out more details, please visit the Cobham Mill Website at www.cobhammill.org.uk.

Article kindly provided by by Mike Measures and Patricia Ward.