In 1988 there was a public outcry at a proposal to demolish Skilton's Yard opposite Cobham Mill and replace it with residential units. Ken Major, a leading national expert on watermills and industrial buildings said that he believed it to be one of perhaps only half a dozen such sites in the country.

the end of the 18th century a local carpenter with the splendid name of Uriah Collyer owned the yard and adjoining house, now called Millwater Cottage. However Collyer was more than a carpenter. He also built houses and he may have built some of the little cottages that used to line River Hill before it was widened in the 1960s.

Collyer is first recorded at this site in the Land Tax returns of 1788. He was tenant until 1792 when he purchased the property and probably rebuilt Millwater Cottage. The earliest I have been able to trace a house on this site is in a deed dated 21st November 1753 which is now in the Surrey History Centre at Woking.

Uriah Collyer died in 1800 but his widow lived on until 1836. They are both buried in St. Andrew's churchyard. They appear to have had at least three children one of whom, Cornelius, retained the property until his death in the 1860s. The house and yard were then sold to George Wood a builder and Timber Merchant. By 1891 the house and yard were the property of Harry James, and many older Cobham residents will remember this as James's Yard rather than Skilton's. Harry's son Stan took over the business and also ran an undertaker's business from here. 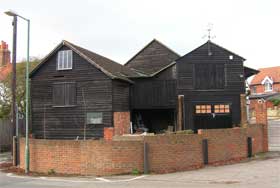 The yard has therefore been in continuous use as a small industrial unit for over two hundred years. Most of the present buildings date from the middle of the nineteenth century, although part of a stable is believed to be at least a hundred years older. Skilton's Yard may not be the most attractive of buildings but it has character and a sense of place.

It is an important site both in the history of Cobham and nationally. It fits comfortably into its position opposite Cobham Mill and relates both physically and historically to the mill and the miller's barns at the rear and side of The Old Mill House. We hope this unique site survives for future generations.