The (Old) Bear was built as farm house in the 15th or early 16th century and became a public house during the 18th century. 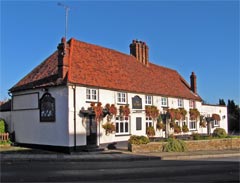 The earliest recorded reference to the Bear is in a deed dated 1719 when Mary King of Cobham, widow, and John King her eldest son conveyed to Robert Patten of Ham, near Kingston, yeoman, 'All That freehold Messuage or Tenement or Inne situate and being in Coveham also Cobham aforesaid commonly called or known by the Signe of the Beare in or neare a certain street there called Church Street '. At this time, Joseph Jacob occupied the Bear. Two years later Richard Bear, son of a stroller or actor, born in the Bear, was baptised at St. Andrew's church.

Although the building was until recently thought to have been built in the late 16th centruy as a "central chimney stack" type of house that became common when bricks became cheaper and more readily available, further investigation has now shown it to be a least 100 years older. It started life as an "open hall" house in the medieval period when there would have been an open hearth in the centre of the building with the smoke finding its way either out through the roofing or through a "gablet" at one end. This new discovery adds to the building's importance especially as Cobham has only a few of such properties.

In the late 16th century a brick chimney was inserted and the old hall floored over. Basically the design was to build a brick chimney stack with four fireplaces heating the two rooms on either side of the chimney both on the ground and first floor. Access to the property was way of a central "baffle entry" immediately opposite the side of the chimney. The staircase would have been on the opposite side.

This building is fortunate in that, despite, later additions, the original plan and design of this medieval property has remained intact. It is an important part of Cobham's precious legacy of historic houses.