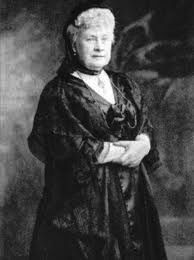 Mrs CW EarleIn the early years of the 20th century Mrs C W Earle (1836 – 1925) was well known as an author of books on gardening subjects, not always critically acclaimed but they sold well. A friend of Gertrude Jekyll and Edwin Lutyens she had her Surrey home at Woodlands, Fairmile Lane in Cobham where she created an attractive garden from nothing. She had connections with the Women's Suffrage Movement and her niece, Lady Constance Lytton, was one of those who suffered the pain and indignity of forced feeding.

Mrs Earle made contributions to the Cobham Church Parish magazine's (CPM) “woman's page”and her name appears as a donor to local good causes such as the Heywood Auxiliary Hospital opened in 1915 and as one of those “who have kindly provided cars and carriages for the use of the inmates” (CPM January 1916).

She had three sons Sydney, an army captain, died in South Africa in 1899, Sir Lionel, a diplomat, and Maxwell, a colonel in the Grenadier Guards listed in the Cobham Roll of Honour. The CPM of October 1917 reported “We give thanks for the return of Col. Max Earle, after nearly three years of being a prisoner, saddened by the death of his twelve year old daughter just a few days before his return”.