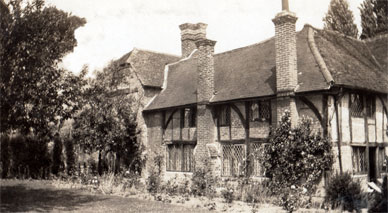 Between 1937 and 1946 my grandparents were in service at Leigh Hill Farm to C J L Langlands and his wife 'Polo'. Langlands was a landed estate agent and Clerk of Epsom Race Course and local celebrity. My grandmother was housekeeper and my grandfather the all-round butler, chauffeur and maintenance engineer for their two cars and general handyman until his recall to the RAF at the start of the 2nd World War.

During this time it was down to my grandmother to keep the house and use the produce of Leigh Hill Farm's abundant gardens and orchards wisely to supplement war-time rations and 2nd generation gardener at the time Sidney Lucas, who had worked there 30 years by the 1930s, kept the kitchen fully supplied. My father – a boy of 9 when his parents first became housekeeper and butler – found the house and gardens fascinating and has left extensive writings describing life at this time. 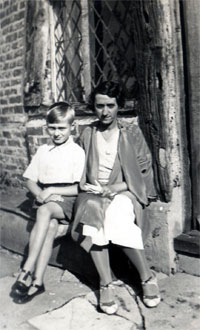 Leigh Hill Farm gardens had been laid out by the previous owner – one Major Buchan - who had added a large orchard of fruit trees. All in all there were about 25 trees. Apples were Worcester Pearmain, Charles Ross and Cox's Orange all maturing at much the same time. Others like Russett and Bramley matured later, ripened for Christmas. 'Hazel' pears were consumed immediately as they ripened fast, fermenting and attracting crowds of wasps! 'Doyenne Du Comice' were picked green, wrapped in tissue and left in a cool store to ripen – which they would do by Christmas – producing a firm white flesh with a wine-like taste and sweetness. The wrapped apples and pears were placed carefully in boxes taking care not to bruise the flesh. The storage area used was the original servants' room on the top storey of the old part of the house. By the time my grandmother and father had finished the room would be full with boxes of fruit. The orchard produced far more than could be used though and the surplus was sold to a local greengrocer (Cobham Fruiterers Ltd).

'Along with the fruit we preserved vegetables and 'vegetable fruits' like tomatoes, rhubarb and sliced pears skinned and peeled. Apples were also preserved by drying and hanging them after they had been cored, peeled and sliced into rings. These were dried to a soft leather consistency and then hung in strings.'

Before 1939 onions could be bought cheaply from Brittany Frenchmen who rode around on bicycles literally loaded with onion strings. One bike could easily carry 40 such strings, more careful loaders could carry half as much again! These strings were then also hung on the roof rafters in the room-loft. This practice stopped during World War II as onions for obvious reasons became scarce.

Runner beans and French beans were sliced and salted and then pressed into glass Kilner jars until they could take no more. They were then covered with boiling water and par cooked to sterilise them, the bottle caps were screwed down and then tightly sealed. Beans stored like this would keep for years. When required they would be steeped in cold water and the salt dissolved out. Tomatoes and gerkins (small cucumbers) were also packed into Kilner jars in the same way, following either being boiled in a large pot or by direct heating in an oven. Rhubarb was boiled in a sugar solution and then put in sterilised storage jars and were sliced skinned pears.

Root vegetables had a different fate. 12" square Biscuit tins were filled with layers of new potatoes, each potato separated from its neighbour by very dry sand. The tins were then placed in a cool outside store – and carrots and potatoes so stored would keep until Spring. Parsnips, turnips and swedes were frost proof and stayed in the ground until wanted. Peas were either cooked in salt water and stored in Kilner jars, or dried and then when needed steeped overnight and then cooked the following day.

'By such methods of fruit or vegetable preservation we were able to enjoy a reasonably varied diet almost throughout the year.' 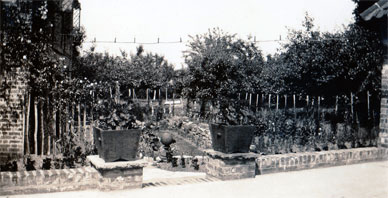 My grandmother would also preserve fruit by making jams and jellies. And although fruits such as oranges, bananas, lemons, pineapples and grapefruit became vague memories during the war the amount that could be preserved from the abundant garden largely made up for this.

The weeks from late August to October were times for being very busy laying up stocks for winter. By 1943 and 1944 'ALL the garden area was laid down for food – beans, broad beans, peas, potatoes, carrots, etc – and onions when we could get the seeds.'

My father also describes the preservation of eggs by placing them in 'a solution of 'water glass' the lay term for sodium silicate which IS chemically a glass but is normally a sticky liquid which dissolves in water, turning the latter a milky colour. 'Eggs placed in that solution lasted at least 6 months. A gallon bucket so used would hold about three dozen average sized eggs. A small galvanised dustbin of about 10 gallons capacity would hold about 450 eggs.

Eventually the main problem was not in storing the eggs, but simply getting hold of them and by 1941 they were rationed to 1 per person per week! Dried eggs made from the leftovers of fresh egg farms came into the shops. Keeping chickens became a must, not a hobby, but at least 8-10 hens were needed for an average family and the birds also needed looking after.

In 1942 my father aged 14 spent 6 weeks working on a chicken farm. He was allowed 'broken, misshapen or double yolked eggs' at 1/- (5p) a dozen – on top of his pay. Another perk was to purchase a hen that had outlived its useful life on the farm (at about one fifth market price) and take it home for dinner. He was paid 10 shillings (50p) a week, but to put this in perspective a farm labourer earned about 30 shillings (£1.50) a week and the highest paid foreman probably no more than £2.50 at the most. Perks in the form of eggs, chickens and vegetables made for a more comfortable if not rich living.

My grandparents continued in service at Leigh Hill Farm until after the end of the war when they purchased their first house in 1946 and moved to a house of similar age 5 Church Street, Cobham though their way of living continued through to the 1960s.

All photographs courtesy of Ita Lawton.