Newsletter Extras - The Road Too Much Travelled (Feb 2016)

The Road Too Much Travelled (with apologies to M. Scott Peck) – Tilt Road and its traffic problems

By Alison Fletcher (with contributions from Richard Benny)

Cobham residents are no doubt aware that, since the start of road works in the Stoke Road for the new water main, traffic in the vicinity has been badly affected. In particular, large numbers of drivers are using Tilt Road as a rat-run to avoid the delays and traffic queues on the Stoke Road. Tilt Road has always been used as something of a rat-run by commuters dashing to the train station or using the Tilt to avoid delays or heavy traffic on the Stoke Road. However, these problems have been exacerbated over recent months because of the road works and the increased traffic using the Tilt, all trying to dodge the (often) lengthy delays on the main road. These roadworks are likely to continue until February of 2016. This has meant that the commons and surrounding area comprising the Tilt Conservation Area through which Tilt Road runs have been subjected to increased traffic flows and speeding motorists in high numbers – far too great a flow for such a narrow and semi-rural lane. Clearly, this detracts from the general character of the Conservation Area, as well as posing a road safety threat to residents of Tilt Road and those roads feeding into it, and also to pedestrians and other motorists. Furthermore, the stretch of Tilt Road from Ashford Gardens up past Korea Cottages is not a properly-constructed road with sound and solid foundations, as it was originally a track which was merely overlaid with tarmac many decades ago (hence the constant breaking up of the surface, potholes, etc., in that stretch – and elsewhere). The increased traffic flow is causing the road surface to break up still further.

To address the problems caused by these increased traffic flows and speeding motorists, a number of Tilt Road residents have set up a Community Speed Watch (CSW) Scheme under the auspices of the Surrey Police. This involves attempts to improve road safety, driver awareness and reduce risk on the Road, inter alia by use of a radar gun and hi-vis jackets worn by the volunteers when conducting the CSW sessions. The group started work in the autumn last year. We have currently a sizable number of volunteers (it is the largest such group in Surrey, according to Surrey Police) but could do with more. If you live in Tilt Road or one of the roads off it and would like to join the group of volunteers, the contact details of the co-ordinator appear at the end of this article. What follows is a brief history of The Tilt, together with an account of the detrimental effects over recent decades of increased traffic flows (and traffic speeds) on what was once (and until fairly recently) a quiet backwater. 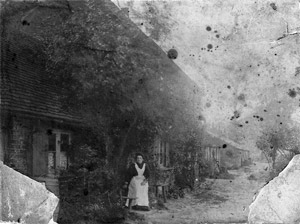 The photographer who took this picture (circa 1880) of the parish poorhouse in Tilt Road (then part of the Epsom Union workhouse) would most likely have travelled along the track in the foreground in a horse drawn vehicle. He would then have clambered down to mount his cumbersome wooden camera on a tripod in order to document this piece of social history.

Stretching away in the background one can just make out the “hovels” (deemed unfit for habitation) – there are no front gardens and no road. These were replaced in the early part of the last century by Charles Combe for his estate workers. Today we know them as Korea Cottages.

The photographer who took the picture below (an amusement to celebrate the harvest of the autumn quince crop) in roughly the same spot some 130 years later, merely had to climb onto a stool to attain the same camera angle and point his mobile phone in the direction of the subject. There is now a front garden, beyond that, a grass verge and an increasingly busy road. Such is progress… 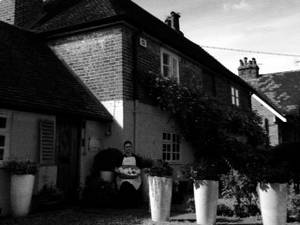 The track passed then, as it does today, across an open area of common land known as the Tilt Common (“Upper” and “Lower Tilt”). Surrey County Council’s definition (by the then Head of Transportation, 2003) of the section of Tilt Road that runs roughly east of the junction with Ashford Gardens is as follows:

“…a private road over which the nature and extent of highway rights, if any, is uncertain. This section is the route of 3 public rights of way, public footpaths, numbers 82a & 83, and a bridleway, number 82.” 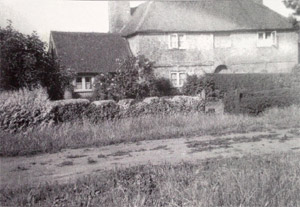 The above picture shows the former workhouse with the relatively unobtrusive and little used track in the foreground. The Canadian army overlaid it with a more solid and less forgiving surface during WWII, since when it has metamorphosed into an unsightly, paved road. 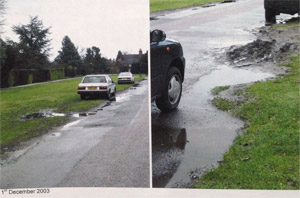 In accordance with the (oft disputed) quote “if you build it, they will come”, once a road was in place, along came the cars. And lorries too – up until around the turn of the millenium, when the factory at the Purefoy’s site was demolished - the “foundation-less” 200 year old workhouse used to shudder with the vibrations caused by too heavy commercial vehicles on a road with no sub-base.

As the common was gradually eroded by vehicles driving and parking on it, the only way to protect it was to resort to the installation of a kerb and wooden posts. Prior to that, any hold-ups on the Tilt (bin day being a notable example) were circumnavigated by simply driving across the open grass. Joy riders too, seemed to find the lure of open ground irresistible when practising their wheelies.

So although the formerly unbounded common is now rendered inaccessible to vehicles, the road has been widened in the process and the traffic volume has greatly increased.

Clearly, the frequency and speed of passing cars now threatens the unique atmosphere of the Tilt and there is a mounting groundswell of opinion from many residents that something must be done. So, with the aid of Surrey Police, a Community Speed Watch campaign is now underway in an effort to address the concerns of residents. The strength of feeling on this subject is perhaps reflected in the unprecedented (according to Surrey Police) number of volunteers willing to sit by the roadside in high visibility clothing! Training has had to be organised in several groups in order to accommodate everyone.

Since most people use cars and no one would advocate preserving Cobham in aspic, it behoves us to manage the changes that modern living brings about, lest we tumble headlong into John Betjeman’s nightmarish vision of an “age without a soul”.

As The National Trust (founded just two years before Korea Cottages were built) states in its Conservation Principles:

“Conservation is defined as the careful management of change. It is about revealing and sharing the significance of places and ensuring that their special qualities are protected, enhanced, understood and enjoyed by present and future generations.”

The Tilt and its special qualities are enjoyed by many residents of Elmbridge as well as locals. So much so that Elmbridge Borough Council felt it merited documenting in the 2015 Character Appraisal.

If you live in Tilt Road or one of the roads joining it and would like to volunteer for the Community Speed Watch Scheme, please contact the Co-ordinator, Richard Benny on 01932 863384.

Please join us on Sunday at 2 pm, meeting by No. 44 Furniture & Fine Things shop on the corner of the Portsmouth Road and Between Streets, Cobham KT11 1HY. Please bring gloves and we will supply high-viz jackets and litter pickers.