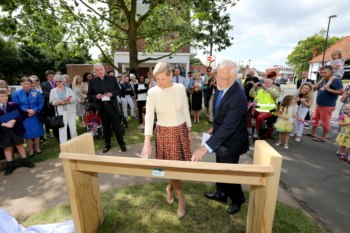 Members of the community in Cobham enjoyed a wonderful afternoon on the 9th July 2014 when HRH The Countess of Wessex GCVO visited The Riverhill Regeneration Project. The Cobham Conservation and Heritage Trust together with local schools, clubs, volunteers, businesses and Elmbridge Borough Council raised £150,000 to complete this award-winning regeneration project.

Her Royal Highness met those involved in the project, as well as members of the Trust and viewed the work which had been carried out. To cheers from the crowds, Her Royal Highness unveiled a new information board dedicating the project to the Diamond Jubilee 1952-2012. Sam Perkins (age 8) presented The Countess of Wessex with a commemorative book about the project. 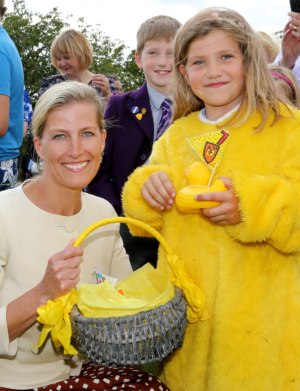 One of the many highlights of the afternoon was a mini duck race on the River Mole. 20 plastic ducks, each one named after a member of the Royal family were designed by Children from the three local schools who have been involved with the project (Royal Kent School, St. Andrew's School and St. Matthew's School).

Watched by the crowd, the little ducks raced down the River Mole to the finishing line by the new viewing platform. The winning duck, named after Prince Andrew was presented to Her Royal Highness by Emily Banfield (age 6) as a wonderful reminder of the afternoon.

The duck race represented miniature version of Cobham's annual Heritage Day event (to be held on the 13th September this year) when 8,000 plastic ducks race down the Mole.

Her Royal Highness then enjoyed a demonstration by the Cobham Millers when she toured Cobham Mill, Surrey's sole surviving Water Mill.

Escorted by Sir Gerald Acher, Chairman of the Cobham Conservation and Heritage Trust, The Countess of Wessex then moved to The Tilt where a tea party provided by Waitrose in Cobham was in full swing. Children from St Matthew's School performed a Maypole dancing demonstration and the Cobham Band provided uplifting music for the afternoon. Her Royal Highness enjoyed a cup of tea whilst meeting members of the Cobham Evening WI who had kindly made the cakes for the party, members of the Royal British Legion and some of the many volunteers who support the Cobham Conservation and Heritage Trust throughout the year. 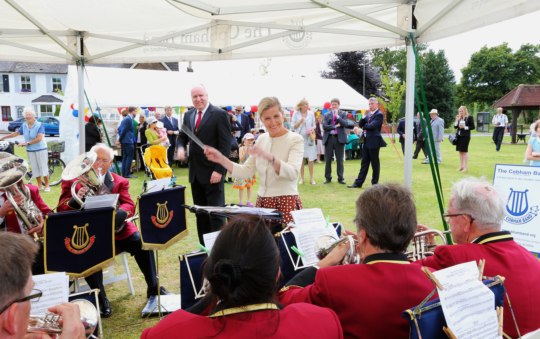 To the delight of the crowds Her Royal Highness swapped places with Glenn Hayter, the Cobham Band's Conductor and briefly took over the baton to conduct the Band.

Under blue skies, Her Royal Highness spent time reading a memorial stone at the Avenue of Remembrance dedicated to remembering those who lost their lives in the Second World War. 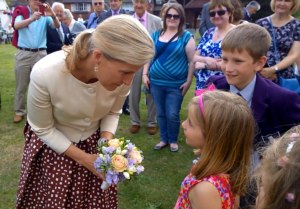 After a short speech of thanks by Sir Gerald Acher, Sophie Perkins (age 5) presented Her Royal Highness with a posy of flowers before she departed.

Sir Gerald Acher, Chairman of the Cobham Conservation and Heritage Trust said, "This was an outstanding afternoon for Cobham, made perfect by the gracious presence of HRH The Countess of Wessex. The Riverhill project has helped bring our community together in celebration of our rich heritage and The Countess clearly enjoyed the happy village atmosphere as she chatted to many who had come out to welcome her."

Councillor Mary Sheldon, Portfolio Holder of Leisure and Culture at Elmbridge Borough Council, said, "The Riverhill refurbishment project completed by the Cobham Conservation and Heritage Trust in partnership with Elmbridge Borough Council and with support from the local community, Surrey County Council and businesses is a resounding success. It is a shining example of how a strong commitment by the community can revitalise our neighbourhoods. The Council is delighted to have been involved in this exciting project to make sure that this picturesque part of Cobham can be fully enjoyed by residents and visitors alike".

&QUOTHeartiest congratulations to you and your committee on the outstandingly excellent newsletter of the Cobham Heritage Trust." CT