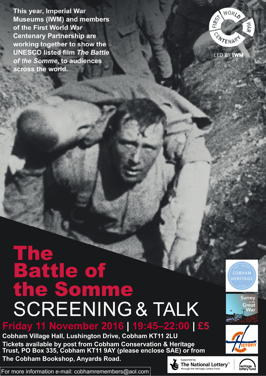 This year, Imperial War Museums (IWM) and members of the First World War Centenary Partnership are working together to show the UNESCO listed film The Battle of the Somme, to audiences across the world.

This British documentary film was taken in 1916 during the early days of the Battle of the Somme by two official cinematographers, Geoffrey Malins and John McDowell. The film has been digitally restored and enhanced and provides a powerful insight into the conditions endured by British troops during this time.

The original film was released generally in August 1916 and watched by about 20 million people in Britain in the first six weeks of exhibition and distributed in eighteen other countries.

Our special Battle of the Somme film screening and talk takes place on Friday 11 November 2016 at 19:45 at the Cobham Village Hall, Lushington Drive, Cobham, Surrey. Tickets are £5 and available from the Cobham Bookshop, Anyards Road, Cobham.

For more information please email This email address is being protected from spambots. You need JavaScript enabled to view it.