Cobham is a community steeped in history. Or, perhaps more accurately, three communities – Church Cobham, Street Cobham and Downside – which is how Cobham began (click on the map for a larger view). It was once described as a ‘creature of the Mole’ and the river has given the place its reason for being as well as providing the rural atmosphere which can still be found, despite Cobham’s proximity to London.

The earliest settlement in Cobham was at the Iron-Age community on Leigh Hill. Evidence of Roman occupation was found at a bathhouse excavated at Chatley Farm in 1942. By the time of the Domesday Book, Cobham had moved to its present position and recent research seems to indicate that the Abbot Chertsey, who owned the manor, laid out a planned village in early medieval times. This planned settlement was developed around the ancient parish church St. Andrew, Cobham’s oldest building which dates from the 12th century and which contains a unique brass of the nativity. 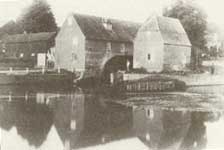 The settlement grew through the centuries, each one of which has left its mark, from Cobham Mill, one of the few working water mills in Surrey, to the glorious Painshill Park and the restored semaphore tower on Chatley Heath. In the 17th century Cobham was home to Gerrard Winstanley and the Diggers a group of political activists with a surprisingly modern manifesto.

In the 19th century Cobham was home to the poet Matthew Arnold and other famous residents have included Mrs Earle who wrote ‘Pot-Pourri From a Surrey Garden’ and other books, Miss Caroline Molesworth who compiled the Cobham Journals, and the Revd Dr John Trusler who wrote a number of books in the 18th century on topics ranging from farming to etiquette.

Another noted Cobham resident was the 19th century lawyer Vernon Lushington who lived at Pyports. He was a friend and patron to the Pre-Raphaelites and included William Morris, Charles Darwin, Mrs Gaskell, Thomas Hardy, the composer Sir Hubert Parry, and many other well-known literary and artistic people among his friends.

Cobham’s ‘big house’ is Cobham Park, built in the 1870s for Charles Combe by Edward Middleton Barry, RA on the site of an earlier house.

Perhaps Cobham’s best-known historic house is Church Stile House dating from the early 17th century and standing as its name implies next to the parish church. Other historic properties include Ham Manor, Cedar House, The Old Mill House, Cobham Court and Cobham Lodge. Benfleet Hall on Cobham’s Fairmile was the second house designed by Philip Webb after he completed the famous Red House for William Morris.

For further information on Cobham’s history see our Further Reading page in the Learning & Discovery section.