Memories of the Cedar Road School

Memories of the Cedar Road School - School days in Cobham

I worked my way through the local school system from 1945, when I started my education at the Infant School (now "Tiltwood") in Hogshill Lane, graduating to the Junior School in the Cedar Road School, two years later. If memory serves me right the Headmistress was Miss Pavier.

The educational methods differed rather in those days, promotion through the classes depending on ability and form position – no question then of holding back the brighter children in the interests of co-education; I found myself in the top form within two years and therefore spent the best part of two more years in that grade. As the older and brighter children left at age 11 to go to the Senior (Secondary) School just round the corner where the Library now stands, I progressed up the examination ladder until it was confidently assumes that I would be top of the school for my last examination. However, a few weeks earlier a new resident in Cobham arrived and she (Denise) beat me by a couple of marks in the finals – to my fury. I always maintained that she beat me because of her neat handwriting. Mine was-and remains- execrable.

These were the days of the Eleven Plus Examination and both Denise and I passed and were granted places at Surrey Grammar Schools Because the final Junior School exams were in the spring, we attended the Secondary School only for the summer term of 1951 before beginning our more exalted school careers.

Looking back, my "lower" school experience was delightful. The summer of 1947 was one of the longest and hottest periods on record – we were very happy children, The Junior School had access to its own gardens on the opposite side of the road (built over many years ago) and we spent many happy hours in gardening and nature study experience; the chestnut tree which still stands in Cedar Road was a convenient source of our 'conkers'. I particularly recall being in charge of the thermometer graph in that glorious summer and regularly recording daytime temperatures of up to 130 degrees (Fahrenheit, not Centigrade- or Celsius as we must say these days) until I was told that the thermometer should be placed in the shade, not in direct sunlight!

Miss Taylor was the Headmistress in those days but the teacher who must surely be best remembered was one-armed Mr Robinson a delightful, good-humoured man and invariable football referee and coach; practices and matches took place in the Recreation Ground. Will anyone taught by him ever forget the standard joke about his 'waistcoat pocket dictionary' – an enormous tome which he would produce from his desk. I also remember Miss Bloomfield and the globe of the world on her desk; I would spin this round and wonder if anyone could ever remember the names of all those countries! Mr Wyatt joined as Deputy Head just after I left and remained a popular local figure for many years.

My form-master in the newcomer's class at what we called the 'senior' school was Jack Taylor, a dry, witty man who, shortly after, became Headmaster of the Junior School, a post he served with great distinction for many years. How was I to anticipate, at the age of 11, that many years later I would marry his eldest daughter!

Luckily for me I lived in the High Street in those days and my garden overlooked the two schools in Cedar Road. In the summer evenings and holidays the whole playground was empty and made a wonderful playground for me and my friend, David Hartfield, whose father was the Caretaker and lived in the house illustrated in the February Newsletter. riding bicycles furiously round the playground and down Cedar Road (with no worries about oncoming traffic) 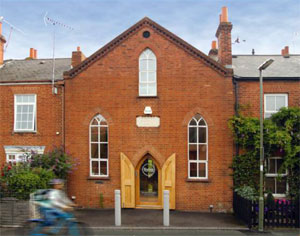 The Ebenezer Chapel (shown left) served as an overflow classroom for the Junior School in those days. I actually wrote and tried to produce my first play in this building; tried because my dramatic propensities were quickly dissipated by the refusal of the cast to learn their parts or behave themselves during rehearsals. Very fortunately no copy of that tyro effort survives in the archives. Many years later, the local Dramatic Group, 'St. Andrews Players' – now 'Cobham Players', planned to use the Chapel as a permanent home for drama in Cobham – plans aborted due to sudden Council Adult Education cuts.

Incidentally, adjacent to the Ebenezer Chapel and cottages in Cedar Road stood the original Methodist Church, long since demolished and replaced with a smaller, more-modern, building; the actual area of the original church is now allotted to car parking. The Church was surrounded by a dense shrubbery, which made an excellent playground for local children.

'I am writing about Street Cobham. I have lived there for over 50 years of my life ...... we had our own shopping centre, three pubs, a restaurant, a snack bar and also tearooms.

We had our own grocery store and ironmongers and we did not need to go up to the High Street for anything.

When I look at it now it is more over-developed than any part of Cobham ...... I remember the United Dairies with the horses at the back of our house. Also Lynns, the butcher opposite.

I also remember Dobson the shoe repairer, with a mouthful of nails; two of his daughters still live in Cobham. My Gran used to work for Matthew Amold ...

I worked in Cobham Mill until I went into the Army during the War and again for a little while after I came out.'