Re-dedication of the Avenue of Remembrance, Cobham 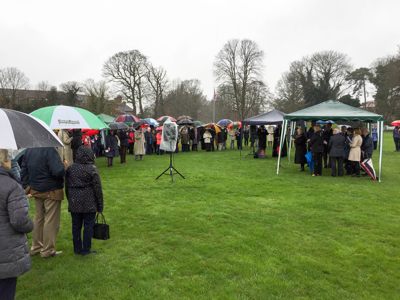 Despite the rain more than 120 Cobham residents attended the re-dedication of the Avenue of Remembrance on Sunday 8th April 2018.

The Avenue of Remembrance is an important memorial to those who lost their lives during WWII and lived in and around Cobham.

A community initiative to restore the Avenue of Remembrance Cherry Trees in Cobham was launched by Elmbridge Borough Council and local organisations in September 2017. The much-loved and admired memorial was originally created and dedicated in 1946 by the Cobham Womens’ Institute who planted the cherry trees in commemoration of local service people who lost their lives in WWII.

Over the last 70 years the avenue had lost its impact, due to some trees becoming diseased, and replacement trees not thriving. A consultation carried out with Cobham and Stoke D’Abernon community in September 2017 highlighted a wish to restore the avenue to its former glory.

A recommendation to renew the Avenue of Remembrance to protect it for the future was approved by Elmbridge Borough Council who also financed the project. Works started in earnest in February 2018, culminating in a "Topping Out" ceremony on 15 February to mark the planting of 46 Cherry trees to replace the original ones. The replacement trees were grown by Barcham Trees from Cambridgeshire. They are now in place to mark the centenary of the end of WW1, and will hopefully be fully mature for the WWII centenary commemorations in 2039-2045.

This project is a fantastic testament to the dedication and commitment of local organisations to look after and nurture their environment, in partnership with the Borough Council. The organisations involved in this initiative are Cobham Cedar Club Women’s Institute, Royal British Legion Cobham Branch, Cobham Conservation and Heritage Trust, Cobham and Downside Residents’ Association, Stoke D’Abernon Residents’ Association and St Andrew’s Church Cobham, together with other churches in the area.