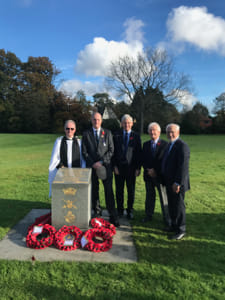 Today after a misty start the sun shone through just in time for us to remember those who had lost their lives at war in the service of their country. Some 40 people gathered at the Tilt in front of the Cobham Heritage Trust memorial to those who lost their lives in the Second World War and at 11.00 the Rev. Dr Mike Branscombe, vicar of St Andrew’s led a short service during which the two minutes silence was observed and the names on the memorial were called out. Wreaths were laid by the Royal British Legion, our councillors and Cobham civic groups.

Those in the photograph are, left to right: Rev Dr Mike Branscombe, Cllrs Alistair Mann and David Lewis, with David Tipping and Sir Gerald Acher vice chairman and chairman respectively of this Trust.